“[What surprises me about psychological ownership is] that these feelings can overpower rationality. People overvalue their possessions despite objective information. People will confront others who they feel have infringed on their “territory” even if those people were trying to help.”

After quite a long break, we are back with a new interview for our Featured section. In this feature we would like to introduce Graham Brown from the Peter B. Gustavson School of Busines at the University of Victoria. In his interview, he talks about how he got into psychological ownership research and what as well as who influenced him the most in his own pursuit of the topic.

Generally, Graham’s research focuses on territoriality and psychological ownership. He applies these two threads to a variety of research topics including negotiation, creativity, and workplace conflict. His recent research focuses on the impact that feelings of ownership have on innovation and new venture success with the thesis that feelings of ownership are both positive in that they propel efforts but simultaneously negative in that they create resistance to help and feedback from others. He hopes to achieve a better understanding of the factors that lead to entrepreneurial success. His work has been published in the Academy of Management Review, Organization Science, and Organizational Behavior and Human Decision Processes and featured in Harvard Business Review online. His teaching focus is in the areas of human resource management, leadership and negotiation and he applies these concepts to help others discover and use their passion to lead and create.

As an active entrepreneur Graham has been involved in several ventures in the travel and education industry including one company that he started while a student at the University of Victoria. His most recent project involves developing a training program to help high school students become social entrepreneurs. Graham also lives on and operates an active berry farm in Metchosin with his wife and four children.

For the full interview simply follow us this way.

“I am surprised that [psychological ownership] did not make it into the marketing and consumer psychology literature until recently. There are so many ways that it is applicable from product acquisition, to use, to disposition. As a field, we are just beginning to tap into it.”

After a number of amazing guest posts and news about a variety of ownership workshops, symposia and events, we are really happy to be back with a well-deserved addition to our Featured section. More specifically, we are delighted to introduce Joann Peck to you and show you what she has to say about her relationship with the phenomenon that we call psychological ownership.

Joann is currently engaged in a triple role as an Associate Professor of Marketing, Associate Dean of the Undergraduate program as well as Interim Director of the MBA Bolz Center for Arts Administration at the University of Wisconsin-Madison. In her research, she mainly focuses on psychological ownership and how it relates to haptics, i.e. the sense of touch. Beyond PO and touch, she is currently working on a plethora of exciting new projects, which she briefly touches on in the interview.If you are just as curious as we are about what Joann is up to next and how she sees the field evolving, you should definitely not miss this interview. For the full interview simply follow us this way.

“I was trying to find the cultural and cognitive foundations of possession and ownership.”

We have yet another addition to our Featured section to announce. This time we had the great pleasure to chat with a true legend of ownership research: psychologist Floyd Webster Rudmin. With his diverse background in philosophy, audiology, social psychology, law and business he managed to approach the topic of ownership and possession from a variety of different angles. The entrance to psychology of ownership and possession, however, was via political philosophy, not via consumer behavior nor via law. He was particularly inspired by the debate of communal vs. private ownership throughout history (Plato’s analysis and Aristotle’s evidence in the 5th century BC, holocultural sociology (sampling cultures) in the 19th and early 20th centuries, and saber-rattling nuclear missiles in the 1950s-1980s). 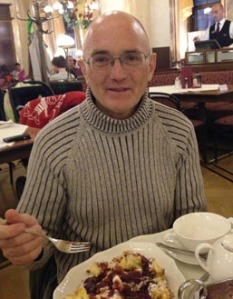 In his featured interview, which you can read here, Floyd talks about his personal path, important works that inspired his career, as well as his opinion on the future of ownership. Click here for the full interview.

“I believe that the nature of ownership is something we need to discover through research—not something that can be stipulated in advance. ”

We are happy to announce that we got the chance to talk to yet another great personality, who we would like to introduce to you in our Featured section. Ori Friedman is a truly inspiring and dedicated researcher who got involved in the topic of ownership when he was studying people’s mental states and realized that many interesting elements were equally related to children’s reasoning about ownership, a topic that hardly anybody looked into at the time.

Unlike our previous candidates, Ori approaches the topic from a purely psychological perspective and demonstrates how diverse and broad the topic can be. Receiving his PhD in psychology at Boston College, he is now an Associate Professor at the University of Waterloo, Canada and mainly involved in social cognitive development, conceptual development, and related topics. More specifically, he investigates how children and adults reason about ownership of property, pretense and fiction.

In his featured interview, which you can read here, Ori talks about his interests and research foci,  about the complexity of the topic and reveals his take on the future of ownership. Click here for the full interview.

“As a part of that review process, an unidentified reviewer made a statement suggesting that one of the more intriguing things about your paper is something that you have said very little about, encouraging us in the future to work on the development and elaboration of the notion of ownership as a psychological phenomenon — “What is psychological ownership?”

Meeting Jon L. Pierce for the first time is a truly inspiring event – especially as a fellow researcher who studies the phenomenon of psycholgical ownership, an area Jon has greatly influenced over the past decades. As a Professor of Organization and Management in the Department of Management Studies, at the Labovitz School of Business and Economics, University of Minnesota Duluth (UMD), he was named one of the University of Minnesota’s Horace T. Morse Distinguished Professors in recognition of excellence in teaching and research in the areas of organizational studies in 2005. In the same year, he received the UMD Chancellor’s Award for Outstanding Research. Apart from research on psychological ownership, Jon Pierce also contributes to the field of psychology of work. He co-authored one of the most influential articles on the state of psychological ownership in 2003 and published his work in the field in numerous scientific outlets.

In his featured interview, Jon explains how his interest in ownership as a psychological rather than a legal phenomenon has been shaped by a reviewer’s comment in 1991 and how this very comment inspired him to look into child development and animal territoriality literature. This also led to important, collegial relationships later on. Further, he talks about what surprises him and what areas of research he considers to be most promising. Click here for the full interview.

You may have seen that we have this section called Featured, where we collect interviews with leading scholars and those who have advanced the field of ownership. The section is by far not exhaustive and there are many more interviews to come.

That said we are more than excited to prominently present the first interview with Russell Belk. Russell is a real thought leader in the field of ownership, meaning of possessions, sharing, materialism, gift-giving and research on the extended self and has authored and co-authored more than 550 top journal articles and books. He currently holds the position as Professor and Kraft Foods Canada Chair in Marketing at the Schulich School of Business at York University. Further, he is past president of the International Association of Marketing and Development, and is a fellow, past president, and Film Festival co-founder in the Association for Consumer Research.

In his interview he talks about how he got involved and – more importantly – so passionate about the topic, what his favorite possession is and how he sees the field of ownership in the future. In order to read the full article, click here.